Between March 1984 and November 1985 building platforms and other earthworks in Parsonage Field, on the western edge of the present village of Stoke Gifford (or Great Stoke) (ST 625800) were cleared in advance of housing development, revealing extensive evidence for medieval and later occupation. With the permission of the developers, Bovis Homes Ltd., an ad hoc programme of recording and salvage excavation was carried out at weekends by amateur members of the Bristol & Avon Archaeological Research Group, under the supervision of J. M. Hunt and J. R. Russell. Finds have been deposited in Bristol City Museum (Accession no. BRSMG 18/1985). A full report is in preparation.

Parsonage Field formerly occupied the western edge of a large triangular green; since the 16th century this has been almost wholly enclosed and infilled, although its outline can still be detected in the present road pattern. It is suggested that this green and the house‑sites around ii represent an early medieval (?11th‑12th century) expansion of Great Stoke away from a putative pre‑Conquest settlement centred on the parish church of St. Michael to the south‑west (ST 62277970). Within Parsonage Field two main areas of early. medieval occupation, A and B, producing large quantities of 12th‑14th century pottery and evidence for timber structures, were identified; the high quality of the ceramics from Area B suggests that it may have been the site of a manor house.

From the mid 14th century onwards timber structures seem to have given way to more substantial stone buildings, mostly laid out parallel with, and close to, the present eastern edge of the field; these included a large farmhouse (Area F) and the probable Parsonage (Area G). From the 17th century onwards the house‑sites in the field seem to have been gradually abandoned as the green onto which they faced was encroached upon; the last building to survive was probably the Parsonage, which appears to have gone out of use in the mid 18th century. No structures are shown in the field on 19th century tithe or Ordnance Survey maps, although there are local oral reports, as yet unsubstantiated, that standing ruins were visible there within living memory.

The six main areas examined in 1984‑85 (A, B, E, F, G, H), are described below in topographical order, starting at the north end of the field and working southwards. Two other areas, C and D, which produced spreads of medieval or later pottery but no definite structural features, are not described. Dating should be regarded as provisional, pending a full analysis of the pottery and other finds. Unless otherwise stated all stone buildings were constructed of local white lias limestone bonded with yellow lias clay.

AREA A (ST 62588017)
Within an extensive scatter of predominantly 12th ‑13th century pottery a stone‑packed post‑base and a series of shallow, discontinuous ?drainage gullies, running north‑west/south ‑east, were briefly examined. As well as pottery the gullies produced substantial deposits of animal bone and a bone die.

AREA H (ST 62658016)
Parts of two rooms of a stone structure at least 12.00m long, occupying a walled enclosure in the north cast corner of the field, were briefly examined. Pottery found within and outside the building was of 14th‑18th century date. Other finds included a perforated hone‑stone and an iron key from the doorway linking the two partly excavated rooms.

AREA B (ST 62568003)
A sample area of approx. 100 square metres was excavated near the southern end of an extensive spread of 12th­14th century occupation debris. Within the excavated area two successive medieval buildings were examined. Building 1 was a very small timber structure of 13th‑early 14th century date measuring little more than 3.50m square internally and containing a stone floored oven with a raking or stoking pit to the south, later replaced by an open semi‑circular hearth edged with stones. The floor‑levels associated with the later hearth produced deposits of cockle, mussel and oyster shells, together with many sherds of glazed wine‑jugs, mostly of Bristol (Redcliffe) manufacture but including fragments of polychrome Saintonge ware. Building 1 almost certainly formed part of a larger, unexcavated structure to the north, which in view of the high quality of the pottery found may well have been a manor house of the Giffard family, who held Stoke Gifford from the Conquest until 1322.

Around the middle of the 14th century Building 1 was demolished, the destruction layer containing large sections of an elaborate green‑glazed louver or roof‑ventilator of Bristol (Redcliffe) ware, the most complete object of its kind yet found in the Bristol region. Building 2, stone based and measuring in its final form 6.00 by 9.00 metres externally, was constructed immediately to the south. It is possible that these changes were associated with the disgrace and execution of John Giffard in 1322 and the subsequent acquisition of the manor, around 1338, by Maurice de Berkeley. Building 2 was probably used as a storeroom since no traces of hearth’s or of a well‑defined occupation layer were found; by the 16th century it seems to have been largely demolished, its ruins being incorporated in a complex of walls which almost certainly represent outbuildings of the Area F farmhouse situated immediately to the south.

AREA E (ST 62537994)
Partial clearance of a building platform exposed the north east and north west sides of a stone structure measuring 9.50 by 6.00 metres externally, with a small annexe to the south west. The interior of the structure could not be examined, although burning along the inner face of the north cast (gable) wall suggested the presence of a hearth. Outside the south western annexe a spread of pennant sandstone roof tiles, associated with green­glazed roof‑crests, was recorded. Pottery from the exterior of’ the building was mainly of 14th‑18th century date.

AREA F (ST 62557997)
Clearance of a building platform exposed the central and northern sections of a three‑unit stone farmhouse laid out parallel to the eastern edge of the field. The building measured 23.00 by 7.50 metres externally and was almost certainly of two stories, the outer walls being 0.90m thick with substantial additional offsets at foundation level. The central room or ‘hall’ was originally open to the roof, with a rectangular stone hearth near its centre; this was subsequently replaced by a chimney, stack of mortared pennant sandstone ~ incorporating two semicircular oven bases, which backed on to a through‑passage at the southwest end of the room. The northern room, which was not fully, excavated, appears to have been unheated. Projecting from, the  north corner of the house was a rectangular garderobe block containing the two shafts connected below ground level. Doorways to the ‘hall’ and garderobe block retained slots for timber doorframes. The presence of a primary central hearth in the ‘hall’ suggests that the building was constructed not later than the 15th century demolition, followed by extensive stone‑robbing and the instruction of drainage channels through the outer walls of the ‘hall’, seems to have taken place not long after 1600, large portions of a late 16th century jug being found in a robber trench.

AREA G (ST 62507991)
A multi‑phase stone building was partly excavated within an area at the southern end of Parsonage Field which is described as ‘Glebe’ on a plan of 1840. This structure can be identified with some confidence as the Parsonage of Stoke Gifford. which according to episcopal records had become ‘very much out of repair’ by, 1735 and was no longer in existence by 1766. The original building, probably of late 14th century date, measured 12.50 by 6.00 metres externally and had either one or two rooms, with a hearth and oven at the north end and what appears to have been a window recess in the south wall. Walls extended north and cast from the building to enclose a midden or garden area producing much 14th‑17th century pottery, including the mask from a 14th century Bristol face‑jug and large portions of another Bristol wine‑jug of similar date. A room was subsequently added to the north end of the building, divided in two by a partition resting on a line of flat stone slabs. Pottery from the floor‑level within the extension was of late 15th‑16th century date and included sherds of ‘Tudor Green’ ware (also present in areas F and H). Meanwhile the south end of the original structure was truncated, a new south wall being inserted 2.00m north of the original. Further major alterations seem to have taken place around 1700, when the original building was given a wooden floor of which joist impressions survived, and a wing with a flagged floor was added to the south east. Abandonment of the structure in the mid 18th century, as suggested by the documentary evidence, would seem to be confirmed by the finds of pottery and glass from the demolition layers; destruction was followed by extensive robbing of the foundations and garden cultivation of the site. 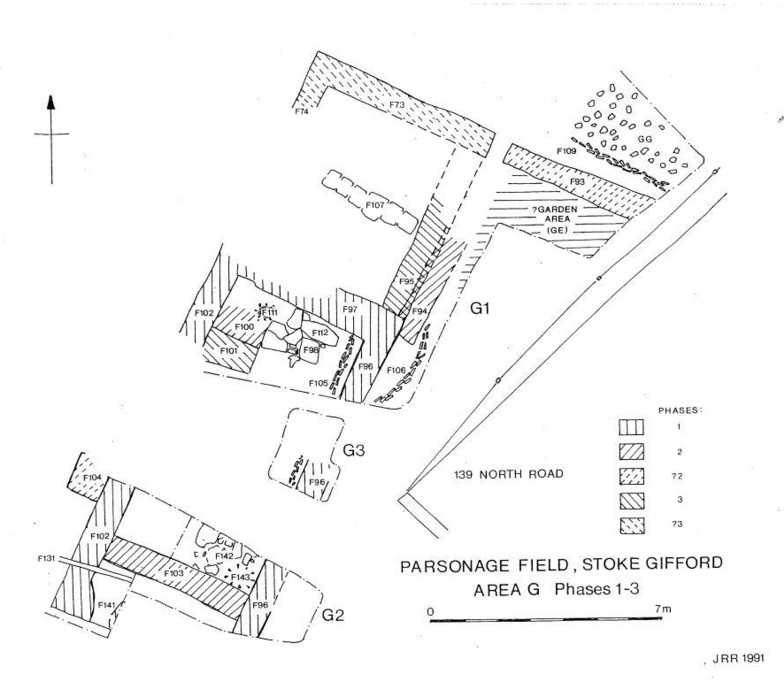 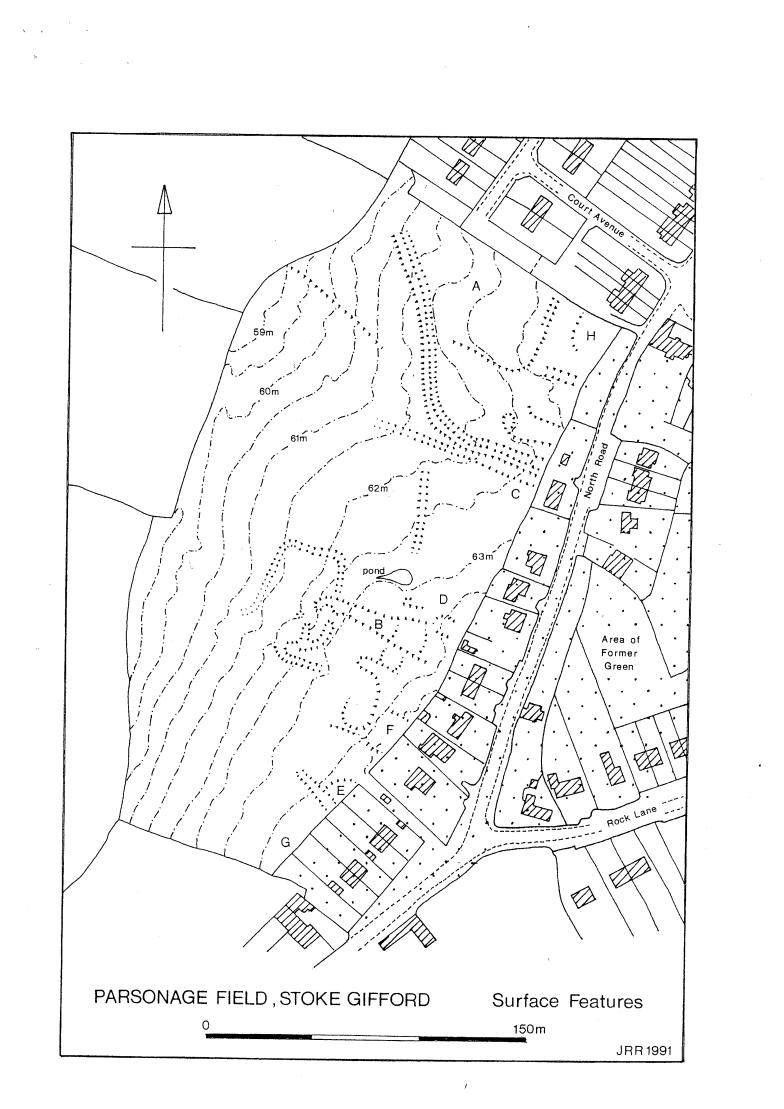